hello all and happy new year!

I've been [very slowly] working on a new website + blog and I think it's time to announce it's new location. it's still completely a work in progress, but this will be my new home, blog and all.

Please make sure you update your readers/feeds as this blog will no longer be updated.

It's been a while since I've done a "What's Up Wednesday" and this time around, it'll be sans pictures in fear of getting that stupid message again that I've reached my storage capacity!

• My mind has been set on design auto-pilot lately. It seems like all I think about these days are the designs I'm doing for others, getting my design site up and running and working on my Etsy shop. But! I really have to remember that I've had tons of success with "custom" sales and commercial work.  I shouldn't put all my eggs in Etys's basket ... it's not the end-all.

One of my friends opened her store not too long ago and she's having TONS of success (check out her blog and store!)! Go Jennie!!

• In the same vein ... I finally ordered my Christmas cards! I've had the design done for more than a week, but I just hadn't pulled the trigger!

• J is going to Boston with his brother for 4 days next week. While I know he'll have tons of fun [they're going to the Patriots game on Sunday], I'm jealous that he's getting to go on a fun trip and I'm nervous [that's not really the word I'm looking for, but I can't think of a better one...] that I'll be home with The Monster solo. I've done it before, but he's so much more mobile and opinionated these days :) That means all meals, all baths and all bedtime routines are all mine! Should be fun [and exhausting]! I told I get a Mexican vacation in return for "letting" him go.

• Y'all. I'm running a marathon relay this weekend. My original intent was to run the half. Well, that didn't happen. So we "settled" for the relay.  Thank goodness we did because I've been more than terrible about keeping up my running, so I'm pretty unsure of what my 5.8 miles will look like on Sunday morning. I know one thing for certain, though: I'll be enjoying a mimosa once it's all over. Mmmm ... that'll probably be the best mimosa I've ever tasted!

• Oh Christmas shopping. I've started ... but I'm nowhere near finished. Hopefully by tomorrow I'll have my brother and his family all taken care of so I can get their gifts wrapped and in the mail asap! Luckily I have ideas for pretty much everyone. But J has to be the hardest person to shop for. Everything he wants is either super expensive or something I can't really buy him as a surprise.

• I think one of my New Year's resolutions is going to be to cut back on my tv. I really watch wayyyy too much of it. And most shows are totally mindless. I'd like to get back to reading more [book suggestions would be appreciated!] and maybe even do a devotional [suggestions on your favorites here, too!].

Ok, friends. Have a fab Wednesday!

The ole blog is on the move. I'm working on a new site and hope to have it [probably as a work in progress] up soon.

Until then ... check out my Etsy shop. Right now, with coupon code MERRY15, I'm giving 15% off all orders. Pick out a Christmas card! Or, stationery is always a nice gift. If you don't find exactly what you're looking for, send me a conversation or email at divinemrsem [at] gmail.com and I can whip something up!

First of all, I fully realize that we're on the the downhill slide to December and that now Halloween AND Thanksgiving have passed. But, I'm determined to catch up ... so bear with me!

But, when I sat down to finally knock out a post ... BOOM! Blogger tells me I'm at capacity on storage. Ugh! Is upgrading my storage the only option? Please, please, please help me!! I'm mostly blog illiterate and don't know what my options are!

Thanks friends ... hopefully I'll be back in business asap!
Posted by Emily at 7:55 PM 2 comments:

[this may be my first time since Jack's first month that I've actually posted a monthly update on time!]

• is so much more of a little boy than a baby. He follows commands, answers occasional questions, makes some of his own decisions and is repeating more and more of what we say.
• loves to play outside. Now that we've had the time change, we have less time outside after work/daycare, but we do what we can.
• has 2 more teeth, bringing his total to 14. I'm kind of worried after my last dentist appointment that his top two canines won't come in. [i'm missing three wisdom teeth and one of my baby teeth never came out/doesn't have a permanent tooth underneath. And, missing teeth is congenital ...]
• is starting to take to stuffed animals. We have an OU sock monkey and all of a sudden, one day he wanted it and would hug it. And it's the most adorable thing. EVER!
• knows several body parts: belly button, eye, nose, ears, mouth
• went through a few weeks of what I believe was an 18 month sleep regression. All of a sudden he was waking up in the evenings and the middle of the night. And, as soon as I went in the room he calmed down and went back to sleep. The last few nights he's been off the night wakings but up early in the morning
• likes: stacking blocks, carrying his horse and cow around, throwing balls, football, sweeping, Boomer Sooner, the OU chant, books, Talking Tom app, dancing, walking around in our shoes, seeing football on tv
• took a trip to the pumpkin patch [blog post on this coming soon!]
• new words: football (ba-ba!!), truck (guck), car, more, mine, go, duck, bye
• was a lumber"jack" for Halloween [post on this coming soon, also!]
• was a ringbearer in John's cousin's wedding on Saturday and he ROCKED it! I was way impressed and beyond proud of Jack. Plus ... he was the cutest guy in a tux.

18 month stats:
•official height and weight stats coming next week when we go to the doctor
•LOVES: bananas, Sprout sqeezable pouches, yogurt, Talking Tom app, stacking blocks, dancing and jumping, milk, walking around in our shoes, "brushing his teeth" [aka sucking/chewing/playing with the toothbrush]
•DISLIKES: all veggies, not getting what he wants, brushing his teeth
•mostly 18 month and 18-24 month clothes, size 5 shoe
•size 4 diaper, size 5 at night 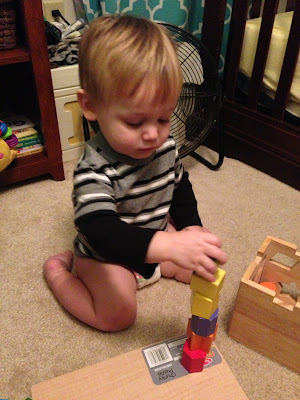 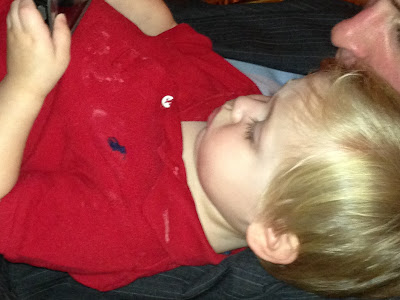 Whew! Maybe no one noticed but I took a little break from the ole blog. Things were getting all too hectic and just the thought of putting a post together overwhelmed me. But! I'm back ... and I have lots of pictures and stories that need posting.

About a week before Halloween all of the school-aged kids at Jack's daycare took a field trip to a pumpkin patch and they brought pumpkins back for everyone to paint.

The day they painted them our favorite daycare worker [and babysitter], Sydney, sent me two pictures of Jack. 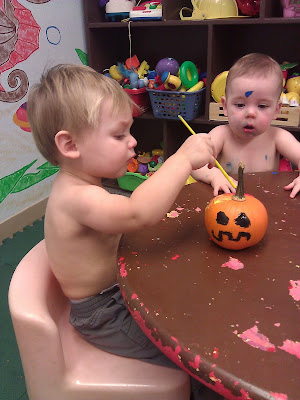 Check out his concentration [and the pumpkin envy on the kid covered in blue paint]! 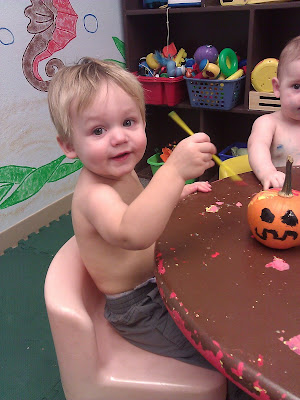 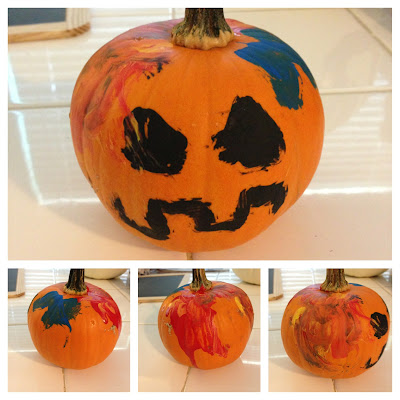 Yesterday John and I celebrated out 6th anniversary! After a sucky Sooner loss and John's terrible allergy attack it wasn't a super exciting. But, we snuck off for a late lunch and quick trip to Bed Bath and Beyond. Yep, we're domestic. I can't believe it's been 6 years ... crazy how time flies! 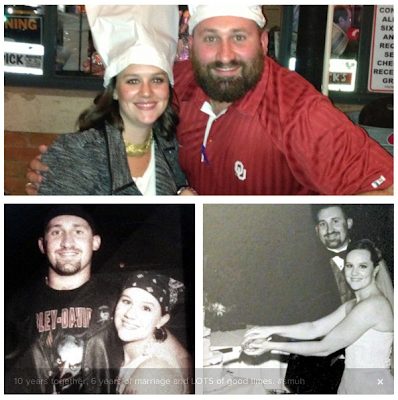 TOP this year at OU/texas // BOTTOM LEFT our first date 10 years ago at Hooties and Harleys [I was so nervouse people would think i actually picked him at a biker bar ... ha!] // BOTTOM RIGHT cutting the cake on our wedding night

Emily
I'm a married twenty-something with a fabulous husband and the cutest dogs you've ever seen. I'm interested in graphic design, photography, interior design and getting things for a good deal (without too much digging). I love that people check our blog, but I'd love it more if you left comments! Hint, hint!